The UFC returns to Las Vegas on Saturday night as the fight capital of the world reopens for combat sports with a welterweight main event between former champion Tyron Woodley (19-4-1) and rising challenger Gilbert Burns (18-3).

As well as everything went for the UFC in Jacksonville — 32 total bouts and only one athlete, middleweight Jacare Souza, testing positive for the coronavirus — Las Vegas was always where the UFC hoped to settle in long-term. The company is based in Las Vegas, and the Nevada State Athletic Commission is among the best in the world. 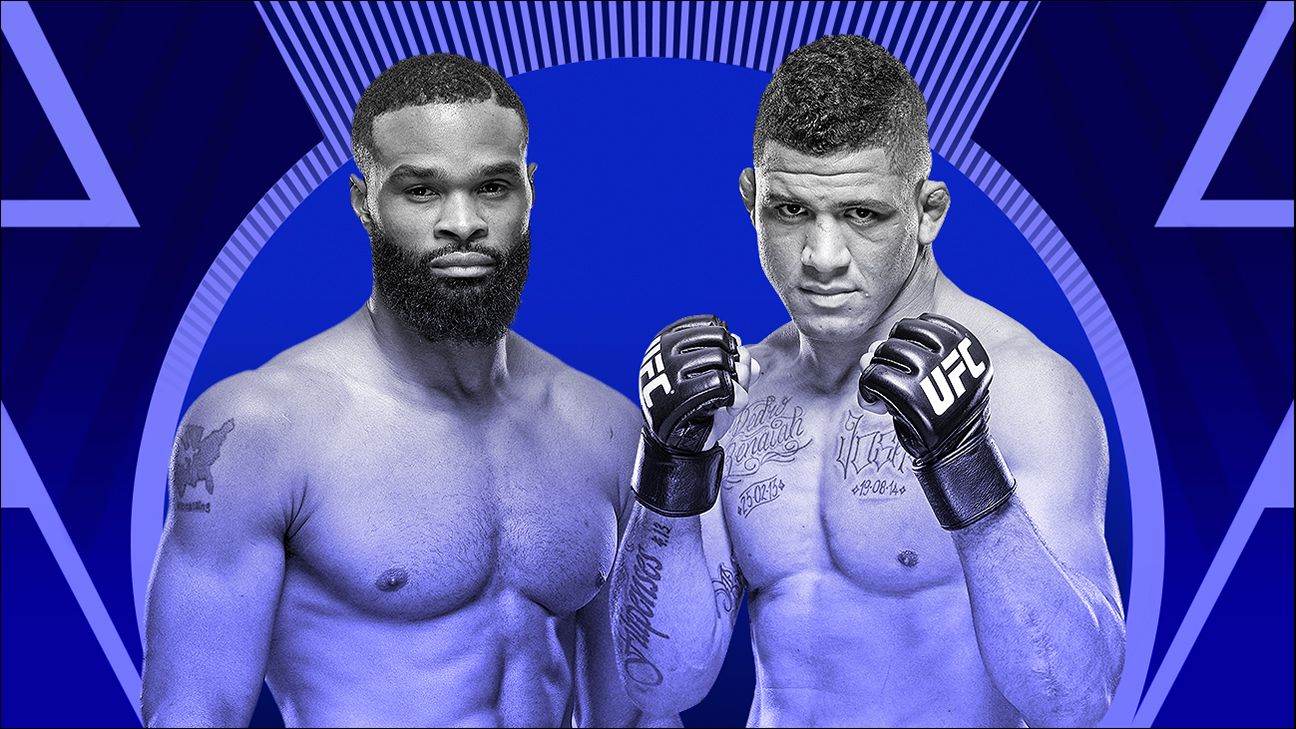 All fights from UFC Fight Night: Woodley vs. Burns will be available to watch on ESPN+.

Las Vegas — and, potentially, Fight Island — will be the UFC’s home for the foreseeable future, and this unique chapter of MMA history will begin at the Apex facility on the UFC’s campus.

Woodley hasn’t fought since losing his title to Kamaru Usman via unanimous decision on March 2, 2019. Part of that storyline was Woodley allowing himself to be distracted by things such as releasing a rap album shortly after the fight. But Woodley said he has been as focused as he’s ever been leading up this bout.

Burns has won five straight and is looking to propel himself into the title conversation.

One thing to look out for is how the smaller 25-foot Octagon — it’s usually 30 feet — will impact the action.

Brett Okamoto, Marc Raimondi and Jeff Wagenheim offer their analysis and insight for every fight on the card.

Katlyn Chookagian might not have been able to take Valentina Shevchenko’s UFC championship, but she sure managed to demolish the champ’s older sister.

Chookagian, 31, thoroughly dominated Antonina Shevchenko over the course of their three-round flyweight bout on Saturday, collecting unanimous judges scores of 30-25. It was Chookagian’s first appearance since she came up short in a UFC title bid against Valentina in February.

The story of the fight was Chookagian’s wrestling, which was surprising, considering she had not converted a single takedown in her UFC career going into Saturday’s contest. That streak came to a decisive end, as Chookagian took Shevchenko down in all three rounds and had her way on the floor.

“I’ve never doubted my jiu-jitsu, I’ve trained under John Danaher, I’m a brown belt,” Chookagian said. “I just haven’t been able to show it because the wrestling hasn’t been there.”

Chookagian’s grappling edge was apparent from the opening minute, as she caught a body kick attempt by Shevchenko and turned it into a takedown. She threatened to end the fight with a rear-naked choke several times, but Shevchenko did just enough to survive. Chookagian becomes just the 10th fighter in UFC history to not earn a finish in each of her first 10 fights in the Octagon.

Watch this fight on ESPN+

Rodriguez gutted out a unanimous decision (30-27, 30-27, 30-27) in a victory over Green that was much closer than the scorecards indicated. Rodriguez constantly found a home for his big left hand, which left Green’s face bloody. But not once did Green slow down. He was the aggressor throughout, especially late in the bout.

Rodriguez’s best sequence came in the second round when he landed three straight left hands, all clean. He often worked off his jab. Green ate a ton of shots, but still kept the pace high. In the third, he caught Rodriguez with a looping left and a big right. The third was Green’s best round, but Rodriguez still pulled off the win.

“That dude is tough,” Rodriguez said. “He kept coming.”

Rodriguez, 33, has now won eight straight, including his first two fights in the UFC. The Los Angeles-area native trains out of 10th Planet under Eddie Bravo and the BMF Ranch with Donald “Cowboy” Cerrone. Green, a 27-year-old California native, was making his UFC debut. He had his six-fight winning streak snapped.

Watch this fight on ESPN+

Hill entered the night as the only unbeaten fighter in this 11-bout event. He quickly extended his perfect record, needing just 1:51 to earn his second UFC victory and the eighth win of his career overall.

Hill, a 29-year-old out of Grand Rapids, Michigan, lived up to his “Sweet Dreams” nickname by ending Abreu with a slick combination. The southpaw landed a right hook to stun the Brazilian, then dropped him with a knee to the body for his fourth career KO/TKO and third first-round finish.

Abreu was never in the fight. Hill dropped him within the first minute with a straight left followed by a right hook. And from there it was all Hill, who landed crisp punches every time Abreu tried to advance, then ended it with the precise combo.

It was Abreu’s third loss in his past four fights.

Royval scored an upset submission win over former title challenger Elliott, securing the tap via arm-triangle choke at 3:18 of the second round.

Royval, who fights out of Denver, survived a wickedly high pace set by Elliott, and eventually beat him in the very place Elliott seemed determined to take the fight: the ground. Elliott repeatedly shot into Royval’s hips on the feet, searching for a takedown. He had success doing so throughout, but appeared to gas out from the effort.

The 27-year-old Royval saw his chance for a finish in the second frame, after calmly escaping a loose guillotine attempt by Elliott. He transitioned into full mount and then immediately to the choke on Elliott’s left side. Elliott tapped almost immediately, resulting in the 10th finish of Royval’s career.

Talk about being your own toughest critic. @brandonroyval told @dc_mma he demands more of himself after winning his debut at #UFCVegas pic.twitter.com/KQOesQlaCN

“He gassed out, I didn’t look good at all,” said Royval, who admitted he was disappointed in the amount of takedowns he surrendered. “Bad performance.”

Despite the newcomer’s self-criticism, it was a very strong way to begin his UFC career.

Elliott has lost three straight fights, tied for the longest losing streak of his MMA career.

It didn’t look a high-percentage submission attempt. Kenney was on top, nowhere near a dominant mount. But he went for a guillotine choke anyway — and Smolka tapped.

Kenney picked up perhaps the biggest win of his career, a submission victory with a guillotine from half guard at 3:03 of the first round. The sequence started with Kenney wobbling Smolka with a right cross. Prior to the finish, it was a back-and-forth battle with both landing good punches.

Kenney vs Ricky Simon would be 🔥

Smolka was working the body, but Kenney got the job done with a big right hand and slick Brazilian jiu-jitsu.

The bout took place at featherweight, but both are regulars in the bantamweight division

“That’s how I fight,” Kenney told Daniel Cormier afterward. “I come and take your head off — neck, arm, something.”

Kenney, 29, has won three of four in the UFC and seven of his past eight overall. The Arizona resident is a former interim champion in LFA at both bantamweight and flyweight.

Smolka, a 28-year-old Hawaii native, has dropped two of his past three fights.

Chris Gutierrez catches Vince Morales with a vicious leg kick that has his stumbling against the cage in Round 2.

Gutierrez won his third straight fight with a bruising performance, finishing it at 4:27 of Round 2 by dropping Morales with a kick to his lead leg. His other lead leg.

Morales was in a southpaw stance by then, out of necessity. He started out orthodox, but Gutierrez wrecked his left leg with a succession of low kicks throughout the first round.

Calf kicks are changing mma as we know it! #WoodleyvsBurns #ufc

Morales, his mobility seriously limited, had to switch it up before the first five minutes were over, but that proved to not be a sustainable answer. One last kick to the right calf sent Morales to the canvas, and Jason Herzog mercifully jumped in, something the referee had appeared poised to do for the better part of the round.

That gave Gutierrez, a 29-year-old out of Colorado, the 11th finish by leg kicks in UFC history, according to the promotion. Unofficially, he landed 36 of 45 leg strikes, according to UFC Stats. Overall, Gutierrez’s striking advantage was 60-8.

“A couple fights back I became the first Guatemalan fighter to ever step foot in the Octagon, so just to be making history says a lot and I’m proud to be that person,” Gutierrez said. “I think the No. 1 thing is to be able to adapt and overcome.

“I want to win and be able to help my family.”

Morales has lost three of four in the UFC.