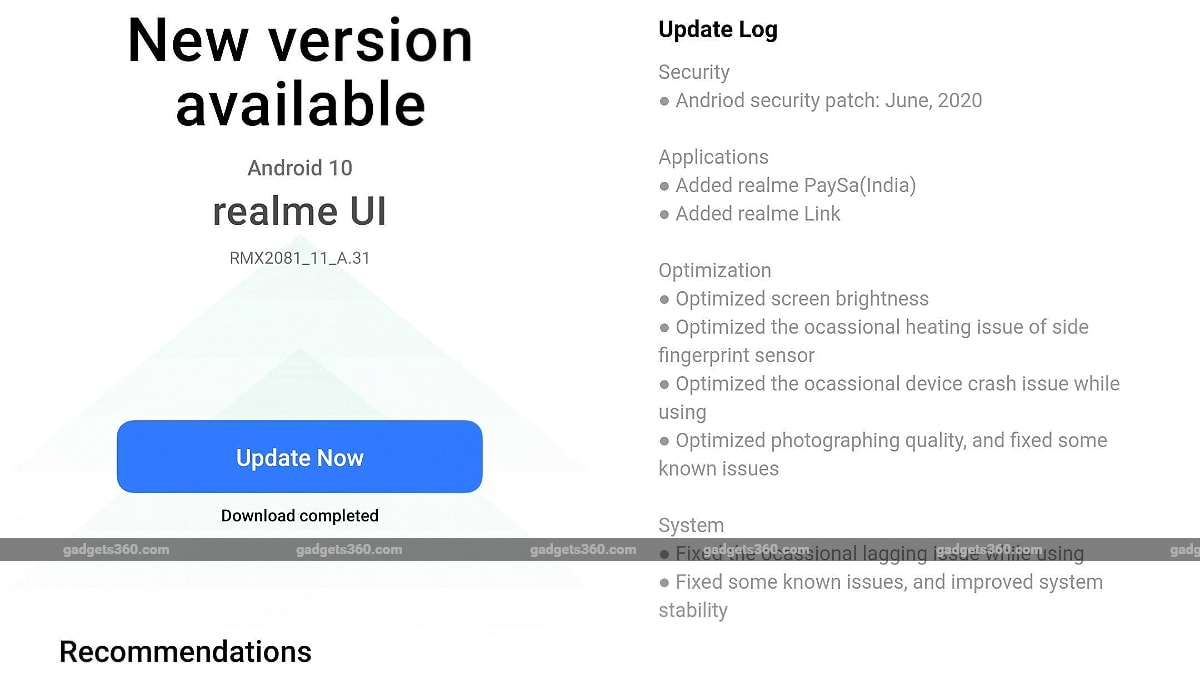 Realme X3 SuperZoom and Realme X3 phones have started to receive a new update just days after their big debut in India. The new update brings along the June 2020 Android security patch alongside improved system stability and few key fixes. The updates are rolling out via OTA and it has arrived on our Realme X3 SuperZoom review unit. The Realme X3 and Realme X3 SuperZoom were launched in India a few days ago, and users who have pre-ordered the devices can either expect the update to be installed on their devices already, or be available out-of-the-box.

The Realme X3 SuperZoom and Realme X3 latest updates’ firmware version is similar i.e. RMX2081_11_A.31. The size of the update is 195MB. We can confirm that this update has arrived on our Realme X3 SuperZoom review unit, while GSMArena reports that the Realme X3 is also receiving the same update. It is best to install the update as soon as it arrives on your devices because it not only brings a few important fixes, but also the latest June 2020 security patch. Check for the update manually in Settings if you haven’t already received a notification.

As the devices were launched in India just a few days ago, not many users should have them in their hands yet. The Realme X3 SuperZoom and Realme X3 haven’t gone on sale yet, and are currently up for pre-bookings only. The first sale is set for June 30 on Flipkart and Realme.com. Hence, the updates are meant only for reviewers and early adopters.

Coming to the changelog, the new Realme X3 SuperZoom and and Realme X3 update brings the Realme PaySa payments app for users in India. It also adds Realme Link support and optimises screen brightness as well. The update resolves the occasional heating issue of the side fingerprint sensor and the occasional device crash issue. The Realme X3 and Realme X3 SuperZoom update optimises photography quality and fixes some known issues with the camera. The phones also experienced some occasional lagging and this seems to have been fixed with the latest update. Apart from this, the update also improved overall system stability.

Editor’s note: An earlier version of this article incorrectly attributed the Realme X3 update, which was reported by GSMArena. The error is regretted.

Is Realme TV the best TV under Rs. 15,000 in India? We discussed this on Orbital, our weekly technology podcast, which you can subscribe to via Apple Podcasts or RSS, download the episode, or just hit the play button below.