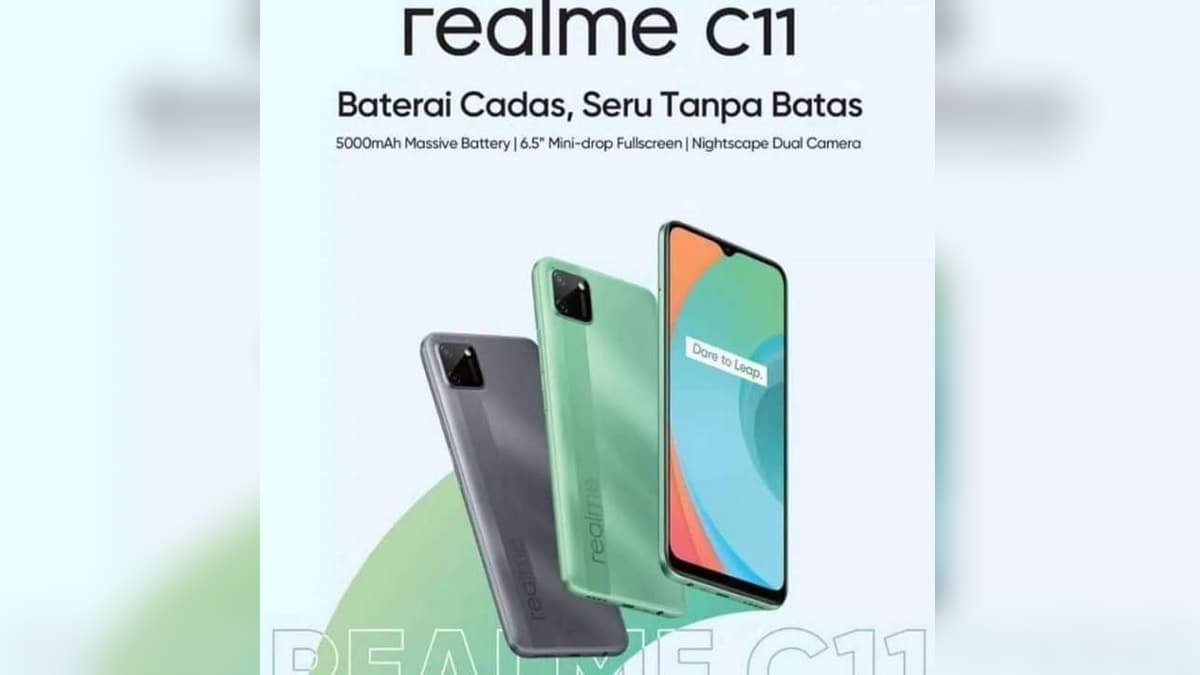 Realme C11 has been in the news for quite some time now as it is expected to be the upcoming smartphone in the company’s budget-friendly C series. Now, what seems to be a leaked poster for the phone states that Realme C11 will feature a 6.5-inch display and have “Nightscape Dual Camera”. The phone is anticipated to be announced in Malaysia soon and is said to be powered by the yet to be unveiled MediaTek Helio G35 SoC. The Realme C11 does not have a release date as of yet.

As per the image in the tweet by tipster who goes by the name ‘I am myself’, the Realme C11 will have a notched display for the selfie camera and slim bezels on the side. The bottom bezel, however, is relatively thick. The image, that seems to be a leaked poster of the phone, shows the Realme C11 in two colours, a green-ish and a grey variant. It states that the phone will feature a 6.5-inch mini-drop fullscreen display and a 5,000mAh battery.

The image also shows the camera placement that was hidden in the previous teaser by the company. The Realme C11 is said to come with dual rear cameras housed in a square module that also includes the flash. As per the leaked image, “Nightscape Dual Camera” hints at the presence of a dedicated night mode in the Realme C11.

Further, the speaker grill, 3.5mm headphone jack, and charging port are also visible in the image. However, it is unclear whether the phone uses a Micro-USB or Type-C port for charging. Notably, there is no finger-print scanner on the back and it is unlikely that it will come with an in-display scanner.

The Realme C11 was first spotted in an NBTC certification listing with mode number RMX2185 and the name “realme C11”. The only piece of information available from that listing was the presence of LTE connectivity.

As of now, Realme has not shared the exact launch date for the phone but it is expected to be unveiled in Malaysia soon.

Is Mi Notebook 14 series the best affordable laptop range for India? We discussed this on Orbital, our weekly technology podcast, which you can subscribe to via Apple Podcasts or RSS, download the episode, or just hit the play button below.