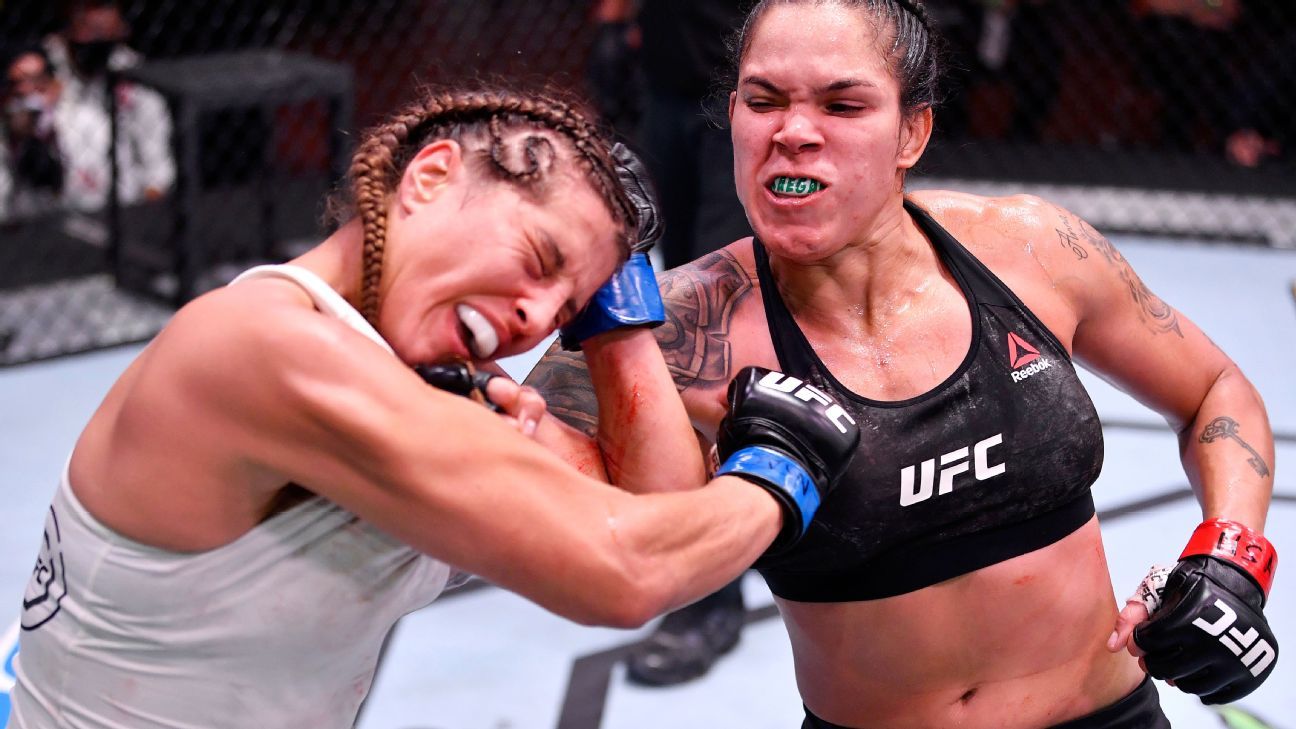 Amanda Nunes continues to have no real peer in women’s mixed martial arts.

In every aspect of MMA, Nunes had complete control in what was a flawless performance. By the end, Spencer was pouring blood from her face and was wearing significant swelling on her forehead from numerous Nunes punches and elbows. Yet she was still able to hang in for all five rounds.

“I’m not surprised. I know she’s very tough. I know what she’s capable of,” Nunes said of Spencer. “I knew if I have to go five rounds, I have to dominate. I have to be as sharp as a cactus.”

The card took place in front of no fans at the UFC Apex, across the street from the UFC’s corporate campus.

With the victory, Nunes becomes the first fighter in UFC history to have defended two titles in two weight classes while still holding them both. Nunes is one of seven UFC fighters in history to be a double champ.

“I’m defending both belts. I’m the greatest,” Nunes said. “I’m so happy now. I don’t know what’s next. But I proved it already.”

On Saturday night, Nunes came closest to finishing near the end of the fourth round. Nunes rocked Spencer with an uppercut. She then landed two big punching combinations, took Spencer’s back on the ground and looked to cinch in a rear-naked choke. But Spencer somehow survived and made it to the bell.

Nunes landed 124 significant strikes, which ties the career high she set against Raquel Pennington at UFC 224 in 2018, according to ESPN Stats & Information research.

Nunes (20-4) has won 11 straight, which is tied for second-best active UFC winning streak with welterweight champion Kamaru Usman. The Brazil native, who lives and trains in South Florida, has defended the bantamweight title five times and now the featherweight belt once. Nunes, 32, has not lost since 2014.

Asked what was next for her, Nunes said, “I want that answer, too. I’m gonna go home later, I’m gonna call Dana White, and we’re gonna have a talk to see my next step.”

Spencer (8-2) had only one career loss coming in, to Cyborg last year. The 29-year-old Canadian, who lives and trains in Florida, is the former Invicta FC women’s featherweight champion. Spencer is now one of only three fighters to go the distance in title fights with Nunes, joining Shevchenko and Germaine de Randamie.