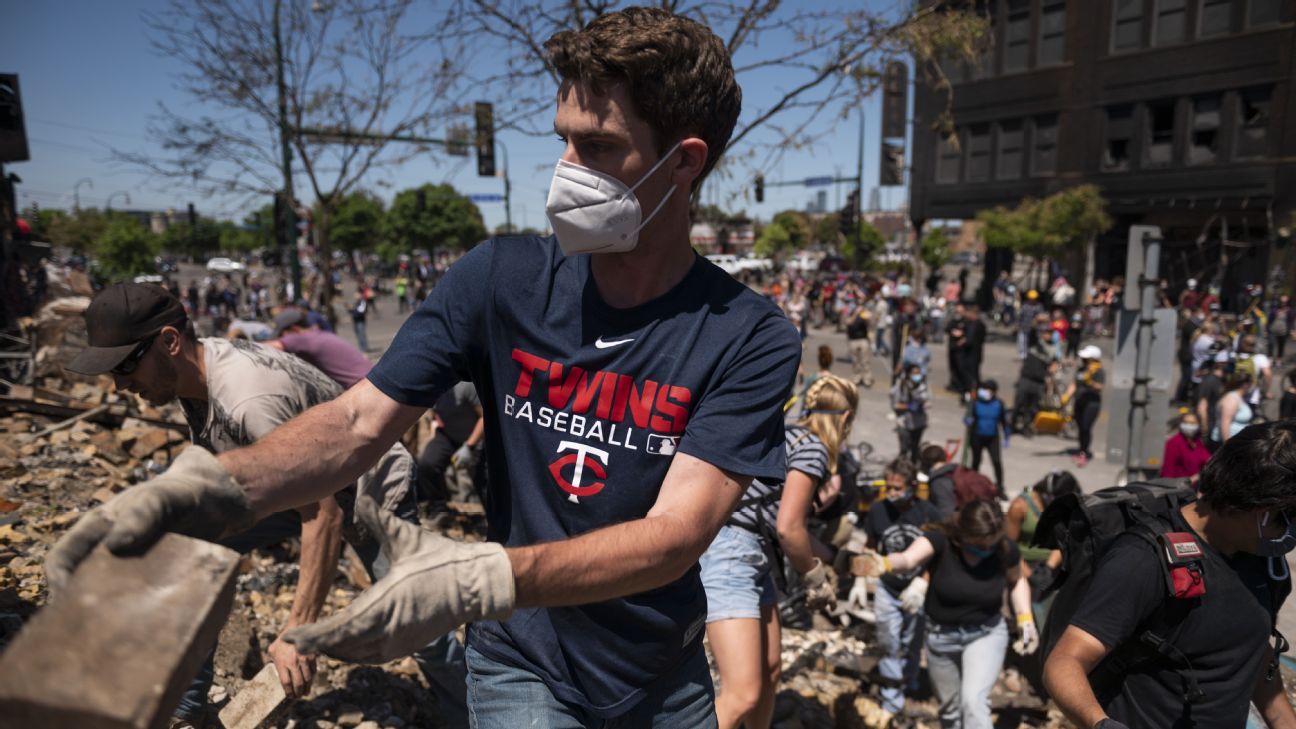 Major League Baseball players joined the wave of athletes, coaches and executives speaking out about their grief and anger over the death of George Floyd.

Floyd, 46, died last week in Minneapolis after Derek Chauvin, a white police officer, kneeled on his neck for more than eight minutes. Chauvin, fired last Tuesday, was charged Friday with third-degree murder and second-degree manslaughter. Three other officers were also fired, but have not been charged. The death of Floyd, who was black, sparked unprecedented nationwide protests across the United States over the weekend.

“Racism is thriving in America. That’s a fact.” said New York Mets pitcher Marcus Stroman, who is black. “If you choose to turn a blind eye towards it … you’re part of the problem that will continue to destroy this nation. Wake up and look in the mirror!”

Racism is thriving in America. That’s a fact. If you choose to turn a blind eye towards it…you’re part of the problem that will continue to destroy this nation. Wake up and look in the mirror!

Open your eyes and stop justifying what you choose to see.

Racism is engrained in our society/culture and the world seems incapable of change. To change the world we must begin with ourselves. Truly look in the mirror and identify if you’re part of the problem or the solution. Your true colors will always be revealed!

Los Angeles Dodgers outfielder Mookie Betts, one of the most prominent black stars in baseball, shared his thoughts on Instagram.

Twins outfielder Byron Buxton calls Minnesota his baseball home, and he took to Instagram to demand progress and justice in the wake of Floyd’s death.

New York Yankees outfielder Giancarlo Stanton posted a Nike advertisement addressing the death of Floyd while sharing his own message.

“Enough is enough. It’s going to take everyone to help this system change,” Stanton said. “No matter you color or attributes, we are all human, who know what’s right deep down. Making a real change with be Justice for Floyd & everyone who came before him. Let’s all be a part of the change.”

I feel for #GeorgeFloyd. He should be alive. I dont want pity, I want change.

“The race card. We hold it. You tell us ‘it’s not about race’ if we ever hold you to it. You don’t want us to have even that 1 bone chilling ‘privilege’ of defense,” Fowler said in part. “You don’t want us to hold any privilege. We don’t hold the privilege of being a criminal, making a mistake, or simply taking a jog, the same as a white man, and being treated the same. He couldn’t breathe. He was murdered. They were gently fired from their jobs. This isn’t right. This can’t go on.”

Chicago White Sox shortstop Tim Anderson, one of baseball’s most vocal athletes about issues affecting the black community, posted photos from the protests on the streets of Chicago.

Washington Nationals reliever Sean Doolittle became one of the first baseball players to speak out about Floyd’s death when he shared a message last Friday with the hashtag #BlackLivesMatter.

“Racism is America’s Original Sin,” said Doolittle, who is white. “It was here before we even forged a nation, and has been passed down from generation to generation. And we still struggled to acknowledge that it even exists, much less atone for it. The generational trauma of racism and violence is killing black men and women before our eyes.”

Pittsburgh Pirates shortstop Cole Tucker shared his thoughts on Twitter alongside a quote from Malcolm X.

“I wish America cared about black folks as much as they care about buildings,” Tucker said.

Adam Wainwright shared a message with his wife, Jenny, featuring a photo of their adopted son, Caleb, who is black.

“I hate that the innocence and joy will be stolen from him when he learns of the prejudices men of color deal with,” Jenny Wainwright said. “I can’t imagine how much that will hurt. How scary it will feel! I want to keep him like this, knowing nothing but pure unconditional love.”

Wainwright’s batterymate Yadier Molina posted a photo of his children on Instagram with a message of love and understanding written in Spanish.

Retired two-time MVP Dale Murphy said in Twitter thread that his son was shot in the eye with a rubber bullet while protesting on behalf of Floyd.

“As terrible as this experience has been, we know that it’s practically nothing compared to the systemic racism and violence against Black life that he was protesting in the first place,” said Murphy, who is white. “Black communities across America have been terrorized for centuries by excessive police force. If you’re a beneficiary of systemic racism, then you will not be able to dismantle it at no cost to yourself. You will have to put yourself at risk.”

Cardinals pitcher Jack Flaherty posted a pair of notes on Twitter with the caption, “I CANT BREATHE,” which were Floyd’s last words.

“The system continues to fail time and time again and nothing seems to change,” Flaherty said. “Officers are not being held accountable for their actions. The badge and blue uniform are not a pedestal that puts a citizen of the United States of America above the law. The badge and blue uniform are there to distinguish those who are meant to PROTECT their communities, not terrorize and kill those that are meant to protect and serve.”

White Sox starter Lucas Giolito also shared a note on Twitter captioned with #BlackLivesMatter and announced that he would be working with Color of Change, the largest online racial justice organization in America.

“Black men & women like Trayvon Martin, Ahmaud Arbery, George Floyd and Breonna Taylor will continue to die on the streets & in their homes if we don’t stand alongside them, echoing their voice loud & clear and demand real change and accountability,” Giolito said.

“Most people in power don’t really care about the ones struggling and use their knowledge and deception to keep the same system and stay in power,” Simmons said. “We can’t keep doing this to each other. We need to change the system. It starts with ourselves.”

“I will never know what it feels like to be discriminated against because the color of my skin,” Alonso said. “To anyone who faces this type of discrimination, I will fight for you and be an ally. I will always stand with you. There needs to be justice and change made for the better of humanity.”

Boston Red Sox outfielder Kevin Pillar shared his former Toronto teammate Stroman’s message and added some of his own.

“I also believe people are afraid to stand out/standup, make themselves vulnerable and go against what has sadly become the norm,” Pillar said. “If you hear/see something you disagree with, don’t be afraid to stand your ground or speak up.”