LAS VEGAS — The UFC will fire up its Apex facility for the fifth consecutive weekend Saturday with a UFC Fight Night main event featuring Dustin Poirier and Dan Hooker.

Poirier (25-6) will be making his first appearance since a failed lightweight title bid against Khabib Nurmagomedov in September. Nurmagomedov won by third-round submission in Abu Dhabi.

Hooker (20-8) will be fighting for the second time this year. He’s coming off a split decision win against Paul Felder in February. It was a brutal fight, which many thought Felder won. Both men were taken to the hospital after although neither sustained serious injuries. 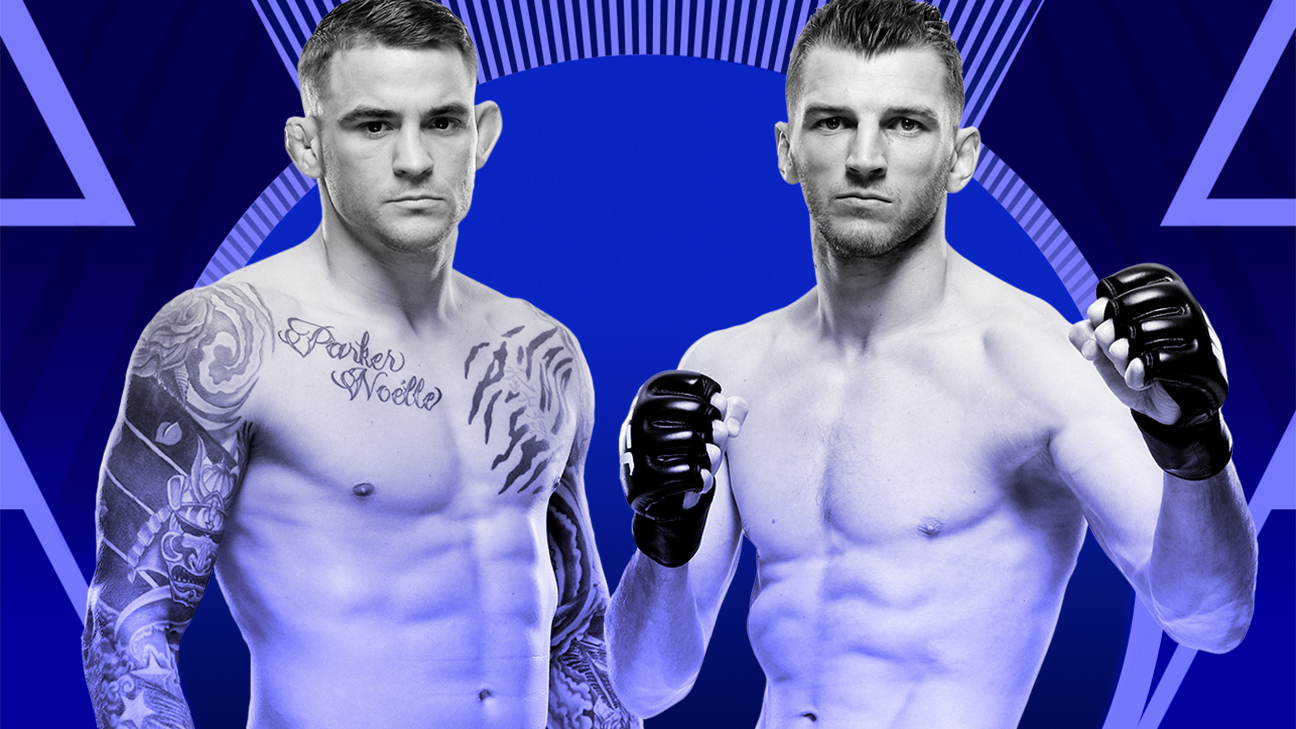 All fights from UFC Fight Night: Poirier vs. Hooker will be available to watch on ESPN+.

ESPN ranks Poirier and Hooker the Nos. 4 and 5 lightweights in the world, respectively, going into this five-round main event. The winner will turn his attention to the tittle picture, which will gain clarity later this summer when Nurmagomedov looks to unify the title against interim champ Justin Gaethje. Will Saturday’s winner get a title shot? Will Conor McGregor stay retired or fight the Nurmagomedov-Gaethje winner? If Nurmagomedov wins, will Tony Ferguson vs. Nurmagomedov happen on the sixth attempt? Lots of questions for down the road.

In Saturday’s co-main event, Mike Perry faces Mickey Gall in a fight with a potentially interesting twist as Perry has said his girlfriend, Latory Gonzalez — who has no MMA or fighting expertise — will be the only person in his corner. Perry, a 28-year-old action fighter, has lost five of his past seven fights.

Gall (6-2) has won two of his past three bouts. The New Jersey native is most known for being the man who submitted CM Punk in the former WWE champion’s UFC debut in 2016. Gall, 28, has not fought since a unanimous decision win over Salim Touahri last August.

Brett Okamoto, Marc Raimondi and Jeff Wagenheim will recap the action throughout the night.

You cannot play with those Marcelo Garcia guillotines. One you feel that hand on the chin it’s time to abandon the takedown or attack the hands. #UFCVegas4

Tanner Boser lands a massive overhand right that stuns Philipe Lins, then follows up with a combination that knocks Lins out.

Boser, of Alberta, Canada, scored a stunning first-round knockout just 2:41 into the bout. Boser came into the bout noticeably trim, weighing in at just 235 pounds, compared with 246 his last time out. Boser said he has placed a lot of focus on strength and conditioning during the coronavirus pandemic.

That was nice by Boser…. Angles and all! #UFCFightnight

Boser’s lighter frame appeared to have a positive effect on his speed. He surprised Lins with a piston, overhand right to the temple, and followed that up with an extended flurry that put the Brazilian away. It was Boser’s first finish inside the first round since 2015.

Lins, 34, has had a tough go in the UFC thus far. A former season winner in the PFL format in 2018, Lins has gone 0-2 in the Octagon, with losses to Boser and Andrei Arlovski.

Kay Hansen and Jinh Yu Frey trade massive blows to each other’s faces early in the third round of their bout at UFC Fight Night.

Hansen was headed toward an Ivy League college softball career until, as a teen, she saw Ronda Rousey operating inside the Octagon and changed her sports focus to mixed martial arts. Making her UFC debut at age 20, Hansen put that inspiration on display with a Rousey-style finish, catching Frey in an armbar at 2:26 of the third round.

“I know I need like one takedown,” said Hansen, “and that’s all I need.”

Regardless of result if Hansen can avoid knee surgery and keep her cervical/lumbar healthy she’ll most likely be a champion within 5yrs. Mature, fast twitch and calm.

She actually landed more than that. Two takedowns in the second round changed the course of a fight that was not going her way. Frey, a former Invicta FC champion also making her promotional debut, had fended off three takedown tries in the first round and figured out Hansen’s timing on the feet. As a result, Frey was landing sharp counter left hands.

That continued early in the second round, but a minute and a half in, Hansen finally got the fight to the canvas, where she kept it for all but the final seconds of the round.

Frey also landed good shots early in Round 3, but when she was again taken to the mat, she found herself in a Hansen armbar attempt. Hansen switched to a triangle briefly, then went back to the armbar and got the tapout.

Frey, an Arkansas native who lives and trains in Texas, is 35. She has been fighting as a pro since 2013, making her pro debut when Hansen was 13.

Frey is a former Invicta FC atomweight (105-pound) champion. She won the belt in 2018 and defended it once before she was stripped of the title in February because she missed weight prior to her fight with Ashley Cummins. Frey won the bout, leaving the title vacant.

Hansen is also an alum of Invicta, where she competed at both strawweight and flyweight. At age 20, Hansen is the second-youngest fighter on the UFC roster. She is a month older than featherweight Chase Hooper.

Jordan Griffin lands a giant kick to the head and Yousseff Zalal lays on the combinations as both fighters give it everything they have through three rounds.

Zalal dealt with some challenges. He had a hard time keeping Griffin from taking him down. He spent too much time with Griffin pressing him against the cage.

But when the fight was standing at distance, Zalal was the clearly better fighter. The judges felt the same, giving Zalal a unanimous decision (29-28, 29-28, 29-28) win.

Griffin took Zalal down several times in the first round and had his back twice, briefly. It seemed like a fight in which Griffin would bully Zalal. That didn’t happen. Zalal rallied in the second round with a perfect straight right to the body that all but folded Griffin. Griffin fell to the canvas and Zalal followed up with hammer fists to the head before Griffin scrambled to his feet.

Not bad for a twenty-three year old! 😈@MoroccanDevil35 gets his second win in the Octagon. #UFCVegas4 pic.twitter.com/NzZQ6W9uTS

In the third, Zalal got off even more with his strikes. Once he pushed Griffin back off the cage, Zalal landed a nice knee to the body, an elbow and a punching combination. Griffin, clearly tired by that time due to energy spent and shots to the body, wasn’t able to dominate on the ground as he had earlier.

Zalal (9-2) has won three straight, including his first two UFC fights. The Morocco native, who lives and trains in Colorado, made his UFC debut with a unanimous decision win over Austin Lingo at UFC 247 in February. Zalal, just 23 years old, appears to be someone to watch in the featherweight division.

Griffin (18-8), a 30-year-old Wisconsin resident, has dropped three of his past four.

“It’s a blessing to be 23 years old and 2-0 in the UFC,” Hansen said. “My coaches said, ‘Enjoy the experience and let everything just come to you.’ I’m not rushing anything. I’m just taking it fight by fight.

“I’m young and just trying to learn. You’re not going to get any easy fights. That’s just how this career goes. You got to be ready and willing to accept challenges and that’s what I’m looking forward to.”