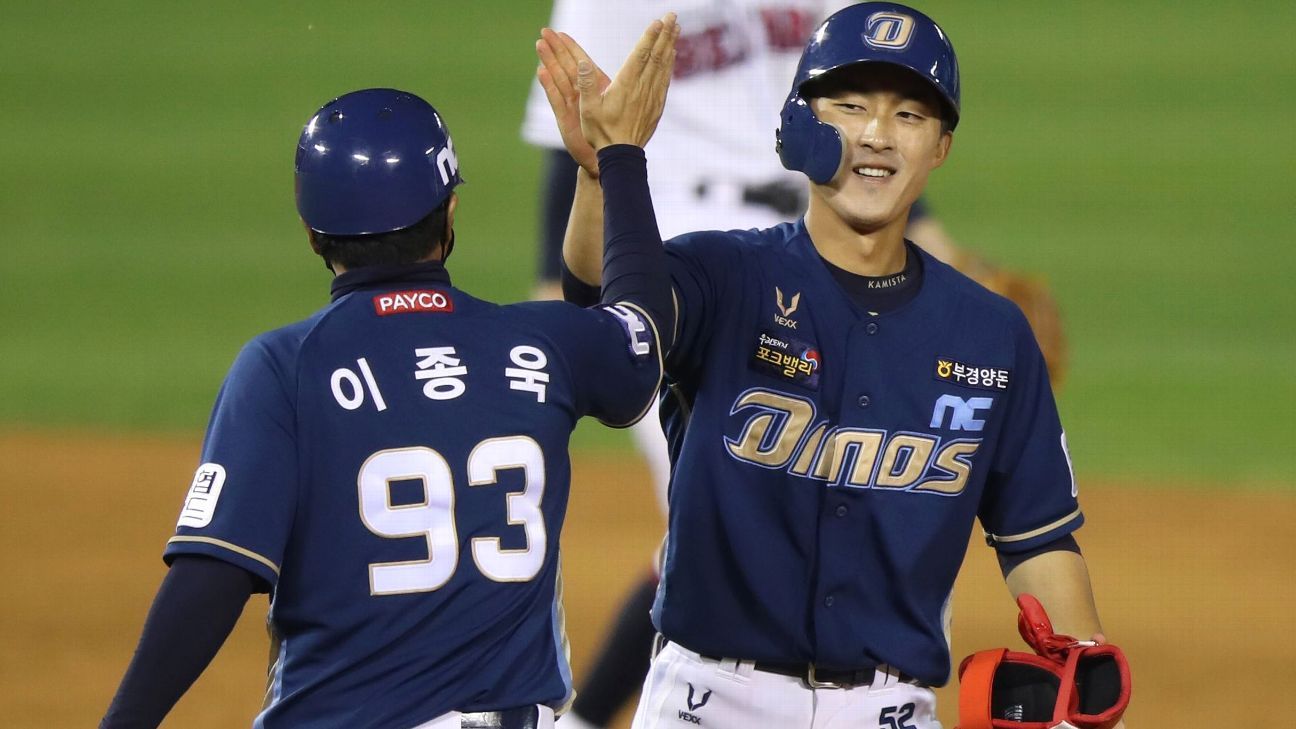 The NC Dinos continue to make the KBO season look like a walk in Jurassic Park as they hold a firm grip on the top of the standings and our Power Rankings.

Here’s a look at what went down in the KBO last week and what we’re looking forward to this week.

1. NC Dinos: 14-3 (Last week: 1) — The Dinos keep rolling along — they haven’t lost a series this season. Jin-Sung Kang in particular has been on a tear, with four homers, 15 RBIs and a 1.428 OPS (although he’s a few plate appearances shy of qualifying among the league leaders).

3. LG Twins: 11-6 (4) — LG kept its momentum headed in the right direction behind the big bat of Roberto Ramos, whose league-high seventh home run was a walk-off grand slam Sunday as the Twins overcame a 7-4 deficit in the ninth against KT Wiz.

LG’s Roberto Ramos wins the game with a walk-off grand slam in the 9th against KT.

🔊SBS Sports with the call pic.twitter.com/EgcdYeTWFQ

4. Kiwoom Heroes: 10-8 (2) — Not a great week for the Heroes, who had to scrape out an extra-innings win to take their series with last-place SK before dropping two of three to Lotte, making nine errors along the way.

5. Kia Tigers: 10-8 (8) — With Matt Williams at the helm, the Tigers have turned things around behind some solid pitching. In five wins last week, they gave up a total of seven runs.

7. KT Wiz: 7-10 (6) — The Wiz, who started the year 1-7, are headed in the right direction thanks in part to Mel Rojas Jr., the son of the former MLB reliever. Rojas had four straight multihit games last week, bringing his average to .423 for the year, and the switch hitter homered from both sides of the plate in consecutive at-bats Saturday.

8. Hanwha Eagles: 7-11 (9) — Despite one of the league’s worst offenses, Hanwha is treading water largely thanks to its top two pitchers — Min-woo Kim and Warwick Saupold, who have a 2.25 ERA and 0.96 WHIP over eight total starts.

9. Samsung Lions: 6-12 (7) — The Lions had their third straight 2-4 week, but they went out on a good note with a 13-0 win over hot-hitting Doosan behind former Phillies righty David Buchanan, who scattered nine hits over seven shutout innings.

10. SK Wyverns: 3-14 (10) — The Wyverns not only snapped a 10-game losing streak, they made it two wins for the week with a 12-inning victory over Kia on Sunday after having allowed the Tigers to tie it in the ninth.

The week that was and what’s ahead

One thing to know that happened last week: We came within one out of having our first tie of the KBO season. With Sunday’s Wyverns-Tigers game tied at 3 in the bottom of the 12th inning, Soo-Kwang Noh grounded a two-out single into left field to make SK a 4-3 winner. By KBO rules, if the score had been even after 12 innings, the game would have gone in the books as a tie.

One thing to watch this week: As we wait to see if anyone can cool off the Dinos, watching NC ace Chang-mo Koo has become appointment viewing. Over three starts, Koo has a 0.41 ERA (one run in 22 innings) and a 25-4 strikeout-to-walk ratio and has held opponents to a .111 batting average. He’s scheduled to face Kiwoom on Tuesday.

Viral moment of the week: Sok-min Park’s reaction to a call by the plate umpire probably wouldn’t go over too well in MLB.

Bat flip of the week: Si-hwan Noh has years to perfect his flip, but this isn’t bad for a youngster.

Chant of the week: Our own Eduardo Perez apparently made KBO history, but why stop there? Maybe he can make it to the top of the charts.

Most impressive stat of the week: Doosan’s Jose Fernandez has 36 hits through 17 games. For comparison, only two MLB players over the past 100 seasons have had 36 hits through 17 team games: Hank Aaron in 1959 and Stan Musial in 1958 (each had exactly 36).

(All times ET; in addition to the game replays listed, all KBO League games on ESPN2 will also re-air leading directly into the next live game telecast.)