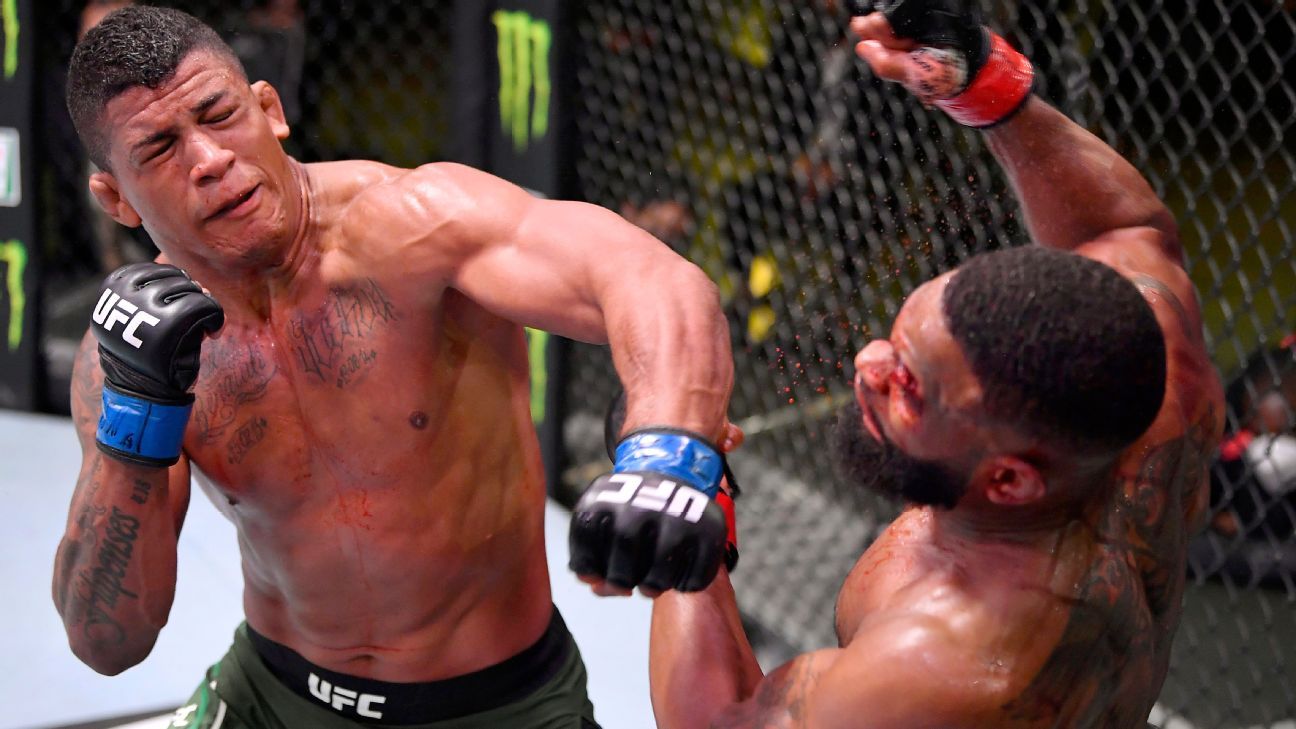 The UFC has a newly minted welterweight contender.

Gilbert Burns defeated former champion Tyron Woodley via unanimous decision (50-45, 50-44, 50-44) in a complete performance Saturday night in the main event of UFC Las Vegas. Burns nearly finished Woodley in the opening minutes and never let his foot off the gas pedal, winning every single round.

“That was a former champion right there — you saw,” Burns said. “And I had a dominant performance.”

ESPN had Woodley ranked No. 5 among MMA welterweights coming in, while Burns was No. 9. Woodley had not fought since dropping the welterweight title to Kamaru Usman via unanimous decision at UFC 235 on March 2, 2019.

Burns trains at Sanford MMA in Fort Lauderdale, Florida, with Usman, the current UFC welterweight champion. But despite that relationship, Burns called for a title shot afterward.

The card was the UFC’s first back in its hometown since March due to the coronavirus pandemic. It took place at the UFC Apex, a facility across from the promotion’s campus, in front of no fans. The Nevada State Athletic Commission lifted its suspension on combat sports Wednesday.

Burns landed a huge combination in the first round that dropped Woodley and opened a deep cut over Woodley’s left eye. Burns pounced on the ground, landed big punches and attempted submissions, but Woodley survived. Woodley had his moments in the second round with his vaunted right hand.

But Burns wobbled Woodley with a right hand in the third and dropped Woodley again in the fourth. Burns also attacked with hard leg kicks that Woodley clearly was feeling late in the bout.

Burns (19-3) has won six in a row and four straight since moving up from lightweight to welterweight. The Brazil native, who lives and trains in Florida, has just one loss going back to 2016. Burns, 33, is a former multiple-time Brazilian jiu-jitsu champion and has made huge strides in the striking department under coach Henri Hooft.

“Not bad for a jiu-jitsu guy, right?” Burns said after Saturday’s victory.

Woodley (19-5-1) has dropped two straight. Before that, he held the welterweight title from 2016 to 2019 with three successful title defenses. Woodley, 38, was unbeaten in seven consecutive fights before falling to Usman, but now has not won since 2018.