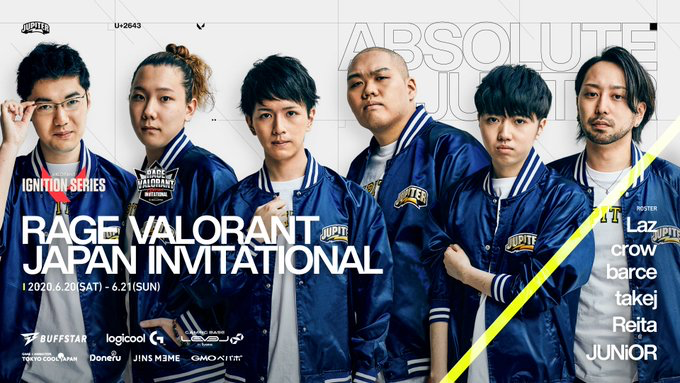 Following two days of fierce competition, Absolute JUPITER emerged victorious in the RAGE Invitational, the first VALORANT Ignition Series in Japan. The team took home the winner-take-all ¥500,000 prize in a phenomenal debut performance on the pro stage, not dropping a single map throughout the tournament.

After breezing into the final by winning their first three matches of the tournament 13-1, 13-0, and 13-1, they faced their stiffest competition in the form of Lag Gaming. Although JUPITER would sweep Lag Gaming in the climax of the event, they were pushed farther than any other match in the tournament, going 13-8 in the first game before closing out the tournament with a 13-6 match.

Absolute JUPITER comes from the world of Counter-Strike: Global Offensive, where their starting five was the No. 1 team in Japan before announcing their intentions to switch to VALORANT at the beginning of March. A month later, the entire lineup, including the team’s head coach Sawada “JUNiOR” Yuya, were acquired by the JUPITER organization, known for its teams in fellow shooting esports Apex Legends and PLAYERUNKNOWN’s Battlegrounds.

The team functioned like a well-oiled machine throughout the two-day tournament, showcasing their chemistry from playing together in Counter-Strike. While every player on the roster starred at some point in the Invitational, it was Takemori “takej” Shogo who took over when it mattered the most in the final, putting up 46 kills against Lag Gaming to capture the first of what could be many future trophies for Japan’s top VALORANT squad. Takej showed his versatility in the finale of the RAGE Invitational as well, first opening with the aggressive vampiress Reyna before switching gears entirely switching to defensive healing specialist Sage.

The VALORANT Ignition Series is a tournament campaign where the game’s publisher, Riot Games, partnered with more than 20 esports organizations around the world to kick off the game’s esports scene. The Ignition Series will continue next weekend with its first North American event, the T1 x Nerd Street Gamers Showdown, where the 16 best VALORANT squads from the region will battle for a share of the $50,000 prize pool.